The Matrix film franchise has always had a close and fascinating relationship with video games. The movies themselves are about characters who dive into something of a video game world, where they’re able to use game-like powers to be gun-toting kung fu-knowing badasses. Beyond that, the stories of the films were expanded on by tie-in games such as Enter The Matrix and The Matrix Online. So it’s not especially surprising to see Epic Games team with the franchise to create The Matrix Awakens: An Unreal 5 Engine Experience, an impressive tech demo that does a lot to further blur the lines between games and films, and maybe even reality.

The Matrix Awakens consists of three different parts. First, it’s something of a hands-off movie, in which Epic blends real footage of Keanu Reeves and some real props with faces and locations generated in Unreal Engine 5. That portion, a bit of fourth wall-breaking Matrix tie-in, then bleeds into a driving sequence that adds some gameplay moments–as Carrie-Anne Moss’s character, Trinity, drives a car onto the freeway, you play demo-original character Io hanging out a window, shooting out tires and blasting villainous Agents to stop their pursuit. The final portion of the demo puts you in a four-square-kilometer open-world city that recalls the nameless urban locale found inside the Matrix in the films. For that portion, you can walk, drive, or fly around the environment, mess with lighting, adjust crowd and traffic density, and uncover a few secrets.

Though the demo features Reeves reprising his character, Thomas Anderson, and Moss returning as Trinity, don’t expect The Matrix Awakens to reveal any secrets about The Matrix Resurrections. The demo’s script was written by Resurrections writer and director Lana Wachowski, but it’s more focused on some of the broad themes of the film, like the nature of reality, than on the actual story of the movie itself. What’s more, Reeves and Moss appear both in-character and out of it to talk about what you’re seeing on-screen, so The Matrix Awakens isn’t nearly as tied in with the franchise storyline as other game experiences of the past. According to Epic, this is also not some precursor to a future Unreal Engine 5 Matrix game, either–it was created as an opportunity to show off the engine and the power of current-generation game consoles, and to create a little extra hype for the upcoming return of the Matrix film franchise.

What The Matrix Awakens does do is demonstrate how closely Unreal Engine 5 graphics on PlayStation 5 and Xbox Series X can compare to the special effects seen in films, and maybe someday, what we see in real life. The demo blends real footage of Reeves with a “MetaHuman” version created in the engine–and then goes one better to bring out a de-aged Neo from the original film, while also recreating the overhead shot of his apartment and desk where Neo is first introduced. And while Reeves and Moss both did motion capture for the demo, there’s no actual footage of the real Moss in the demo at all.

Those faces are impressive, and there are moments when it’s hard to tell the real footage from the Unreal regeneration. For the de-aged version of Reeves, chief technology officer Kim Libreri said Epic used enhanced scans of the actor’s face that were made when the original Matrix film trilogy was filmed. And while Epic could have rendered the faces of its MetaHuman characters on more powerful computers, which would have made them look even better, and used that footage in the demo, it wanted to make sure everything in The Matrix Awakens was rendered using the power of the PS5 and Series X.

“That’s what you see in all our promo material–it’s the console version of the character,” he said.

The second part of The Matrix Awakens adds some gameplay to the situation, and it’s pretty much the end of any Matrix story ties within the demo; the idea is that, as Io, you’re taking part in a training simulation for newer human recruits in the war against the creators of the Matrix. The scene is immediately reminiscent of the highway shootout action sequences of Reloaded, but it’s not a sequence recreated from the film, like the bullet-time scene is.

“The cool stunts of the car driving through the city and power sliding is really cool because we built this entire city,” Libreri said. “We are able to just drive around it and then record that stuff into this thing called Take Recorder and Sequencer, and then layer out the other actions and trigger explosions. So the whole schtick on this is, it’s cinematic creation through simulation.”

The Matrix Awakens By The Numbers

The Matrix Awakens took Epic Games more than a year to make, and its expansive open-world city is impressively dense. Some stats on what the city includes:

In fact, the car chase sequence is played in the city you later explore in the demo. And that city was, somewhat shockingly given its level of detail, procedurally generated. The city itself includes something like 10 million art assets and around 7,000 buildings, as art director Jerome Platteaux explained. And while there’s not a lot of gameplay included in the city component, you can drive through in a car, smashing into other vehicles and sending them flying in the same way they scattered in The Matrix Reloaded’s freeway scene. The city also includes crowd and traffic artificial intelligence to make it more realistic.

Libreri said Epic wanted to show how easy the tools of Unreal 5 make it to create an open-world game, and in fact, the city from the tech demo is being given out to developers in the Unreal 5 community. It doesn’t actually include any copyrighted assets from The Matrix films or anywhere else, and therefore, there’s nothing barring Unreal users from creating content using the city. 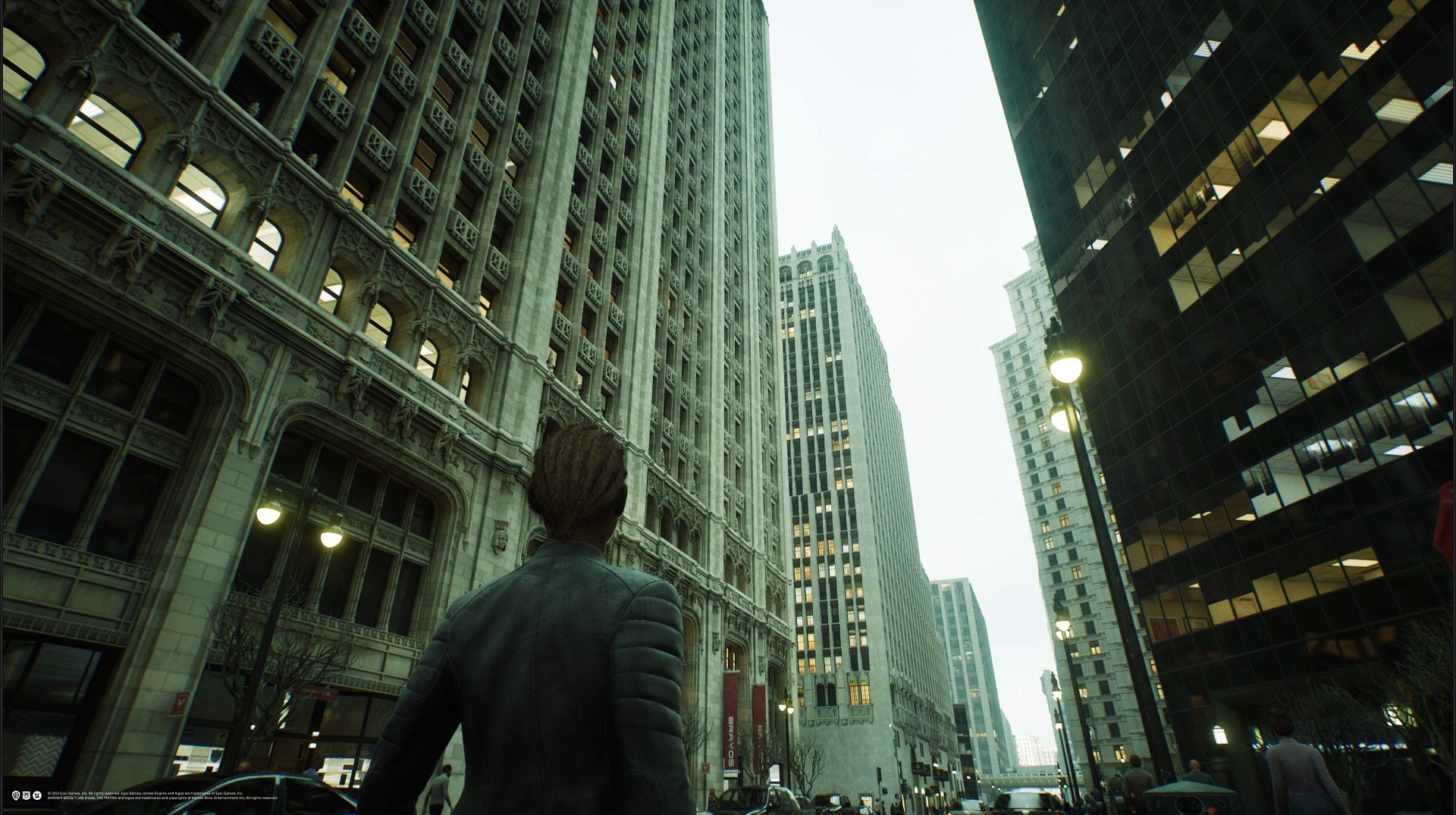 While Unreal Engine is primarily used to make video games, Epic’s tech also has its place in the movie industry. Unreal Engine tech has been part of the process of making film visual effects for some 20 years, and the engine is famously used to help make digital effects on the Disney+ show The Mandalorian. The capabilities of engines such as Unreal 5 may also drastically change how movies get made. Libreri said that, as a person who formerly worked in the movie industry, he’s always trying to explain to filmmakers the possibility of shooting scenes and effects within game worlds, such as the city from The Matrix Awakens.

The car chase scene was made within the city more or less the same way filmmakers would create it in the modern world, Platteaux explained. Epic developers scouted around for locations within the procedurally generated world and used them to create the shots they wanted. But working in the game world also helped to make aspects of filming easier, he said.

“A huge advantage for when you’re doing a story in a video game world, is the world is alive. So there’s crowds, there’s traffic. There’s stuff that you don’t have to even think about,” he said. “You just come with it for free. Meanwhile, when you do visual effects, usually you have to say, ‘Okay, let’s simulate the crowd for this shot.’ ‘Okay, let’s simulate the crowd for that shot.’ So here, you just place your camera, and it’s pretty good.”

For Libreri, the ability to make realistic-looking places and even people in Unreal Engine 5 suggests that games and movies will blend together more and more in the future, since it’ll be possible to use the same art and animations for movie visual effects and in-game graphics.

“The big creative takeaway for us is that look, you know, with engine technology being what it is, you can make a movie and then the assets can be used for a video game. You can make a video game and you can film in it,” he said. “In our case, on this, we made the world that will be game-like, and we filmed our content inside that virtual world. You know what, by the time we get really into the core of shipping UE 5 next year, this whole world, you’ll be able to load it onto an LED screen and film and get in-camera visual effects and film something on the streets of this demo.

“It’s like, hey, in the future of entertainment, am I making a game? Am I making a movie? Am I making both? Do I have to even choose right now? You have to make some choices, but … there is a lot of flexibility. And I think that as we see a new generation of creators beyond the current filmmakers and the current game makers, I think you’re going to see stuff that we can’t even imagine. …And if this is what a Xbox Series X and a PlayStation 5 can do today, can you imagine what the next generation of consoles is going to be able to do? It’s mind-blowing.”

The Matrix Awakens: An Unreal Engine 5 Experience is available to download for free on the PlayStation Network and Xbox Games Store right now.