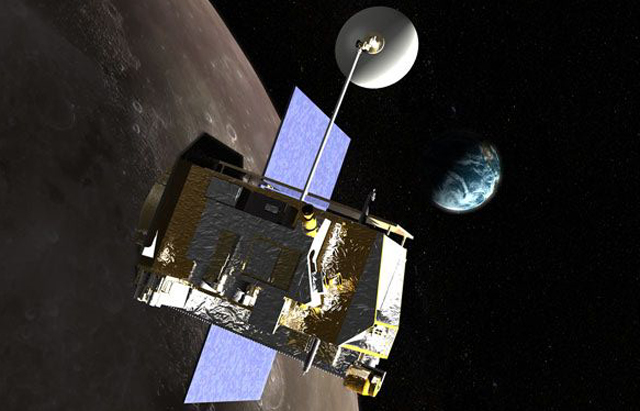 A Super Flower Blood Moon lunar eclipse will occur tonight (May 15) and may be a mesmerizing spectacle for Earth-bound viewers, but for the spacecraft on the moon, it’s more of a hindrance.

That’s because the three currently active lunar spacecraft — NASA’s Lunar Reconnaissance Orbiter (LRO), India’s Chandrayaan-2 orbiter, and China’s Yutu-2 rover — are all solar-powered. Since the moon will undergo a total lunar eclipse on May 15 into the morning of May 16, the entire sunlit half of the moon will darken as the moon enters Earth’s shadow, and the spacecraft will not be able to charge their batteries.

Fortunately, it’s not the spacecrafts’ first experience with a total lunar eclipse. You can watch the lunar eclipse online in a series of webcasts, starting around 9:30 p.m. EDT (0130 GMT). The eclipse will end at 2:50 a.m. EDT (0650 GMT).

Related: What time is the Super Flower Blood Moon eclipse?

An artist’s illustration of NASA’s Lunar Reconnaissance Orbiter at the moon, which will be starved for power during the total lunar eclipse of May 2022. (Image credit: NASA)

Since the LRO started its mission in lunar orbit in September 2009, the spacecraft has experienced 11 total lunar eclipses, so its team knows exactly how to prepare for this eclipse’s 85-minute-long period of totality, or total darkness — namely by powering down.

“When LRO goes through long eclipses, any drain on our battery is not ideal, so we turn off the instruments and wait until we can completely recharge the battery before turning the instruments back on,” LRO Project Scientist Noah Petro told Space.com. “We also will warm the spacecraft up so that when we are in the shadow of the Earth, we don’t cool down too much and get into a position where the spacecraft and instruments are too cold. We’ve done this a number of times, so it’s a well-rehearsed set of procedures.”

In fact, the preparations began several weeks ago. “We performed a small burn of our engines to slightly adjust our orbit such that we minimize the time in darkness. That burn and subsequent maneuvers have put LRO in the best position to minimize time in darkness and prepare us for Sunday night/Monday morning,” said Petro.

If you take a photo of the 2021 total lunar eclipse let us know! You can send images and comments to [email protected].

It’s likely that Chandrayaan-2 will undergo a similar set of procedures. Chandrayaan-2 launched on July 22, 2019 — 50 years to the day from Apollo 11’s lunar landing — and underwent lunar orbital insertion on August 19, 2019. It experienced a total lunar eclipse on May 26, 2021.

Like LRO, it is powered by solar arrays, which indicates that it, too, will probably shut down during the eclipse. (The Indian Space Research Organization has not responded to a request for comment about Chandrayaan-2’s eclipse procedures.)

Yutu-2, however, will escape the wrath of the total lunar eclipse, just as it did on May 26, 2021. While LRO and Chandrayaan-2 are orbiters, Yutu-2 is a rover that landed on the far side of the moon in January 2019 as part of China’s Chang’e 4 mission. It has since been exploring the Von Kármán crater.

Being on the surface of the moon means that Yutu-2 is subject to lunar days and nights, each of which lasts approximately 14.5 days at the rover’s location. As a solar-powered vehicle, Yutu-2 cannot operate during lunar nights and thus powers down for more than two weeks at a time. Given that total lunar eclipses only occur during full moons, in which the far side of the moon is in total darkness, the rover will be in the midst of lunar night on May 15 and will already be powered down.

Whatever set of procedures the moon’s spacecraft will take during this lunar eclipse, they’ll have to repeat them again soon — the next total lunar eclipse will occur in the early morning hours of Nov. 8, 2022.

Editor’s Note: If you snap an amazing lunar eclipse photo (or your own eclipse webcast) and would like to share it with Space.com’s readers, send your photo(s), comments, and your name and location to [email protected].