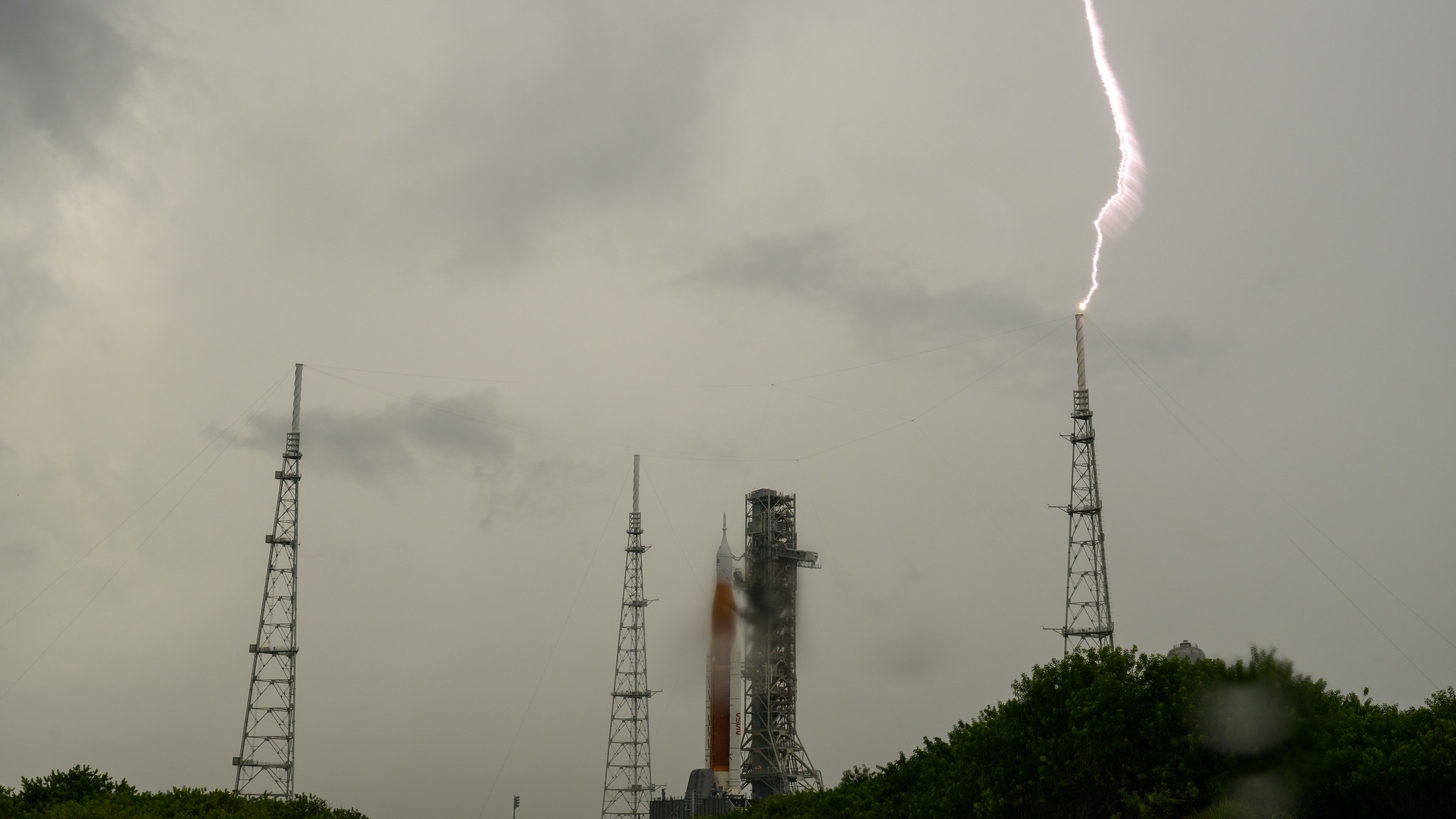 Dramatic photos show the lightning towers surrounding the Artemis 1 stack — a Space Launch System (SLS) megarocket topped by an Orion crew capsule — doing their job in carrying the big electrical load safely away from the rocket.

The dramatic thunderstorm Saturday (Aug. 27) appeared to threaten the highly anticipated launch of Artemis 1 Monday (Aug. 29), but all is well after NASA evaluated the electrical load in the area of the rocket. The launch remains on track for Monday at 8:33 a.m. EDT (1233 GMT). You can watch the launch live online Monday starting at at 6:30 a.m. EDT (1030 GMT).

“Whenever we see things that are as dramatic as lightning, we all we pay a lot of attention to it — as we should,” Jeff Spaulding, NASA’s Artemis 1 senior test director, told reporters Sunday (Aug. 28) at NASA’s Kennedy Space Center in Florida, the site of the expected launch.

Lightning is seen near Launch Pad 39B at NASA’s Kennedy Space Center on Aug. 27, 2022, two days ahead of the scheduled launch of Artemis 1. (Image credit: NASA/Joel Kowsky)

Spaulding said technicians recorded five strikes on the launch pad lightning towers, with everything “working as it should.” All evaluations overnight showed that the rocket was protected, he added.

“We have a threshold that we look at to see what the magnitude of the strikes are, and we did not meet that criteria to have to do an intensive, more invasive type retest,” Spaulding said.

Lightning strikes one of the lightning towers at Pad 39B at Kennedy’s Space Center in Florida on Aug. 27, 2022. NASA’s Artemis 1 moon rocket is on the pad, awaiting a planned Aug. 29 launch.  (Image credit: NASA Kennedy Space Center)

Lightning strikes next to Launch Complex 39B at Kennedy Space Center a few moments ago as NASA’s Space Launch System rocket and Artemis I await their Monday launch during a two-hour window opening at 8:33 a.m. EDT. pic.twitter.com/UsfBX1Q2u8August 27, 2022

Such a retest may have delayed the launch of Artemis 1, but so far the rocket remains go for launch on Monday. A blog post (opens in new tab) from NASA said that the weather is 80% go for the beginning of the launch window at 8:33 a.m. EDT (1233 GMT). Weather favorability drops to just 60% as the two-hour window continues, however.

The agency is working to get this mission going as smoothly as possible, but the challenge will be bringing an unflown rocket on an ambitious launch to safely bring Orion around the moon for an approximately 40-day mission.

This mission will need to meet or come close to meeting its major objectives to approve Artemis for future crewed missions to the moon, from launch through splashdown.