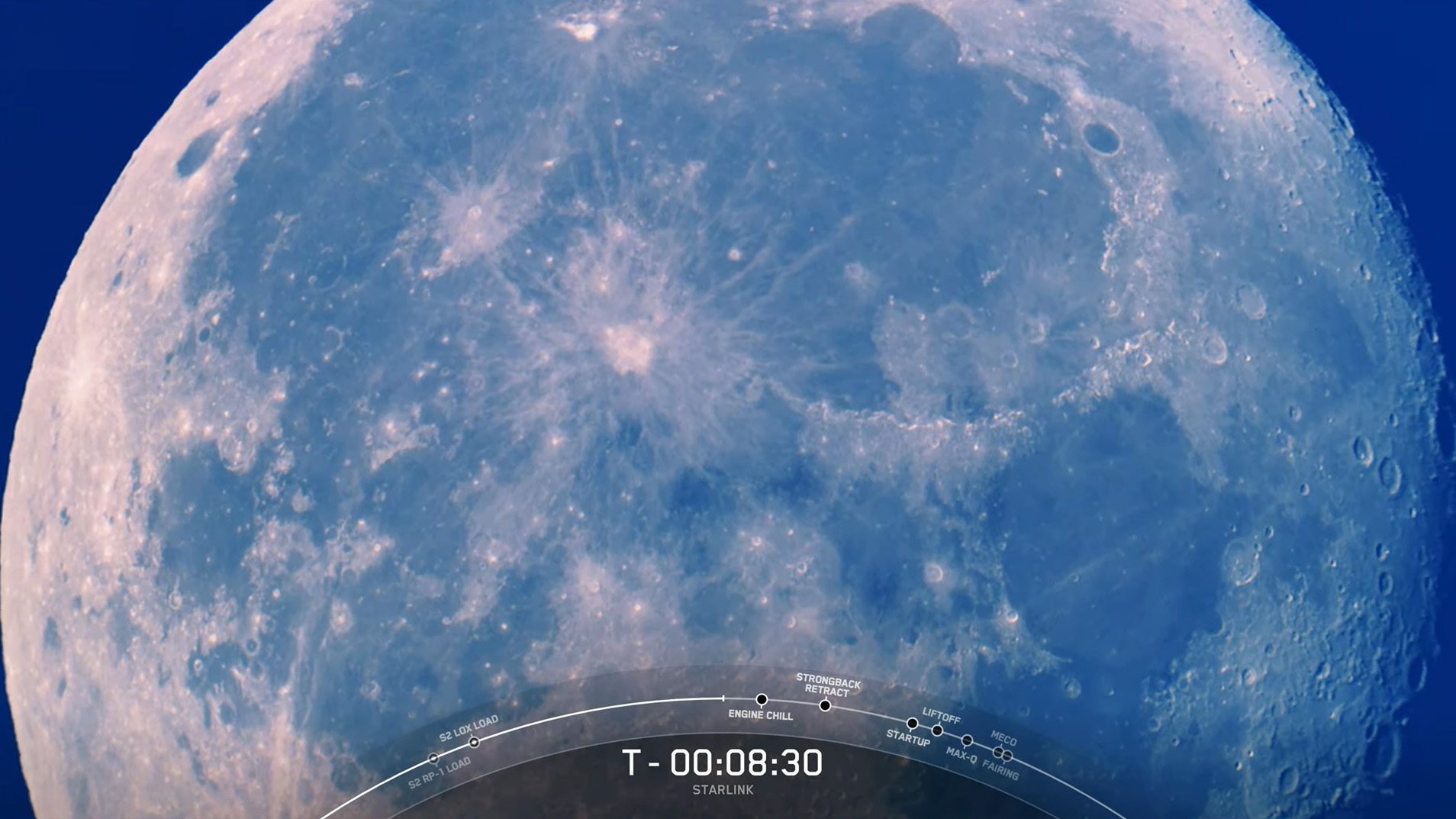 When SpaceX launched a new Starlink fleet into orbit last week, the rocket wasn’t the only star.

As SpaceX prepared its ground-based tracking cameras for the early-morning Falcon 9 rocket launch from Florida on May 18, its operators snagged a spectacular view of the nearly full moon. Minutes later, the Falcon 9 launched 53 Starlink satellites to space from Pad 39A of NASA’s Kennedy Space Center in Cape Canaveral.

“What you’re looking at on your screen is this incredible live shot of the being beincg captured by one of our tracking cameras at the Cape,” SpaceX production manager Jessie Anderson said during a live broadcast. “Now, these are the same cameras that we use to track Falcon 9 during launch, and today we’re getting a bonus view of the moon, which looks pretty incredible there on your screen.” Anderson said the view was captured with the help of a SpaceX launch engineer named John.

A SpaceX rocket launch tracking camera captured this amazing view of the moon just ahead of the company’s launch of a Falcon 9 rocket carrying 53 Starlink satellites from Pad 39A of NASA’s Kennedy Space Center on May 18, 2022. (Image credit: SpaceX)

The amazing solar system sights did not stop there.

When SpaceX launched the Starlink mission at 6:54 a.m. EDT (2254 GMT), one company photographer captured stunning views of the Falcon 9 with the rising sun.

A SpaceX Falcon 9 rocket launches with the rising sun to carry 53 Starlink internet satellites to orbit from Pad 39A of NASA’s Kennedy Space Center, Florida on May 18, 2022. (Image credit: SpaceX)

In one photo, the Falcon 9 soars spaceward as a silhouette as the morning sun glows with warm yellow-orange light. A second photo captures the moment the Falcon 9 crossed in front of the sun, as seen by the photographer.

SpaceX Falcon 9 rocket crosses the rising sun in this stunning view of a the Starlink internet satellite launch from NASA’s Kennedy Space Center, Florida on May 18, 2022. (Image credit: SpaceX)

The next SpaceX rocket launch will be a the company’s Transporter 5 rideshare mission carrying a variety of small satellites for customers. That flight is scheduled for no earlier than May 25 from Space Launch Complex 40 at the Cape Canaveral Space Force Station.

« What does a giant black hole and its galaxy sound like? » HBO’s ‘Westworld’ is returning for season 4 and here’s a trailer for your sci-fi needs