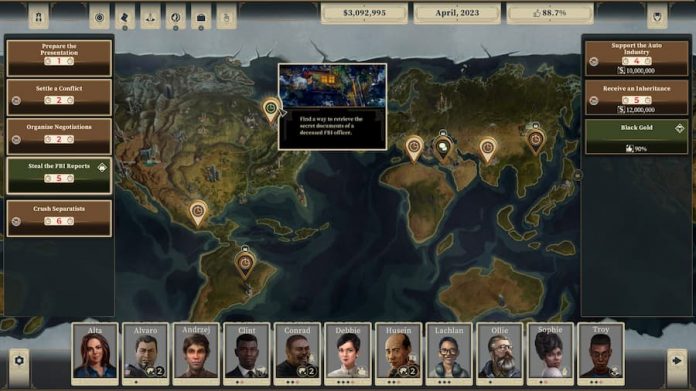 This is the President, which sees you become president to cover up your crimes, is coming to mobile this May.

Previous released on PC, This is the President is, pretty obviously, inspired by Donald Trump’s stint in the Whitehouse, to the point that one of the objectives is get yourself lifetime immunity from prosecution. Naturally, you can’t just press a button or sign a form, you’ve got to work your way up to it, which is this title’s strategy elements come in.

Now, with the game landing on mobile, on both Android and iOS platforms, you can take your abuse of power on the go. Why not boost your virtual approval rating by sending assassins to deal with an inconvenient critic or employ hackers to do what they do best? And don’t forget to Tweet like your life depended on it.

Throw in some FMV video and you’ve got a game that, if shady political wrangling is your thing, could keep you occupied on a long train journey. That said, we’re not entirely comfortable with the way that, by leaning into Trump’s presidency, it implies that everything’s okay now.

This is the President is coming to Android and iOS, via the App Store, the Google Play Store and the Samsung Galaxy Store this May 10th.

« The Centennial Case: A Shijima Story Gets a Curious New Story Trailer » Binance blocks crypto accounts of relatives tied to the Russian government