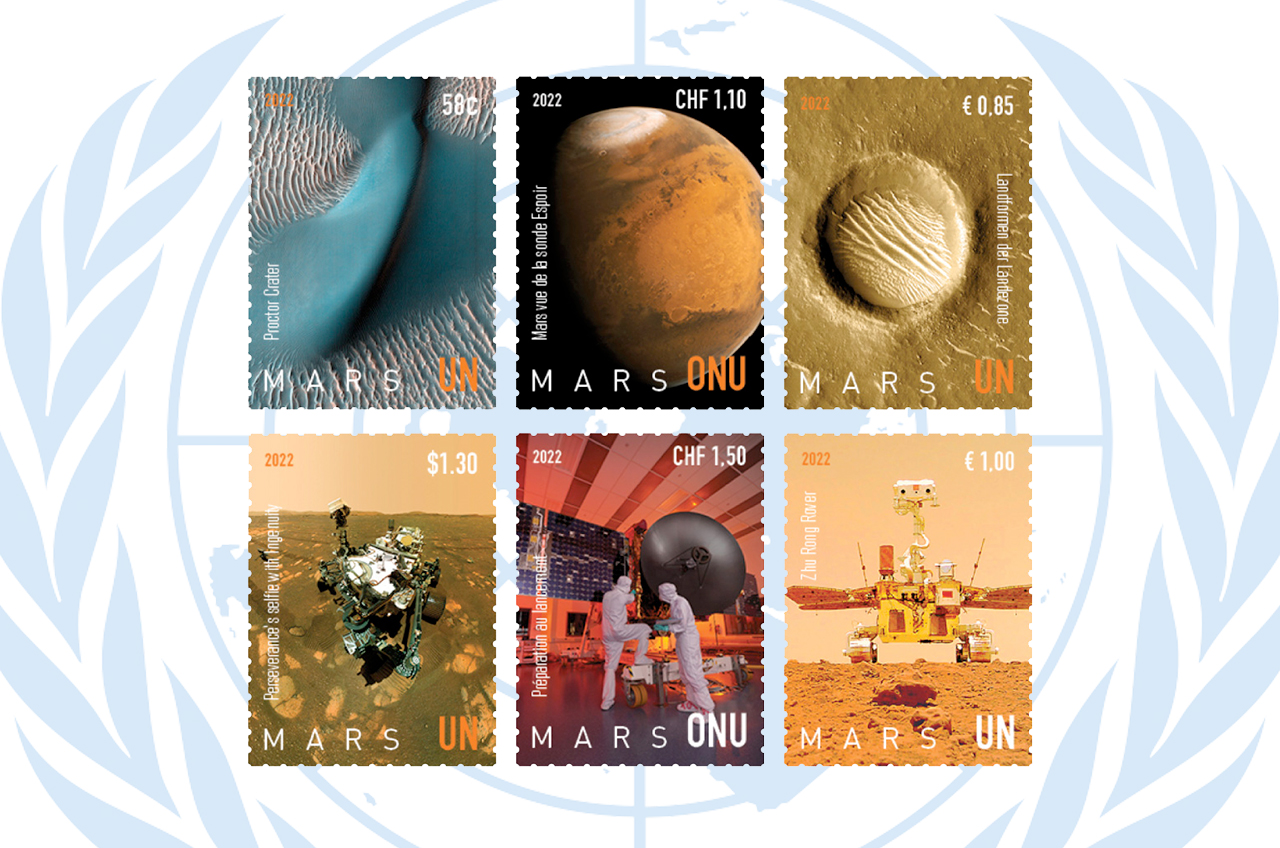 With more countries operating spacecraft on and around Mars than ever before, the United Nations is celebrating human achievement at the Red Planet with its latest release of postage stamps.

“Mars has been a source of curiosity for centuries. In a historic year for exploration, three missions reached their destinations on, and around, the ‘Red Planet’ in 2021. This stamp series marks those pioneering achievements,” UNPA officials wrote in a press release announcing the new “Planet Mars” stamps.

Two of the new UNPA stamps and one of the souvenir sheets (a sheet with a single stamp surrounded by a margin that is printed with an image complementing or completing the design of the stamp) celebrate the Emirates Mars Mission, the UAE’s first interplanetary mission, which arrived in Mars’ orbit on Feb. 9, 2021. The stamps depict the mission’s “Hope” (“Al-Amal” in Arabic) probe and a photo of Mars that was returned by the spacecraft.

Two other stamps and a souvenir sheet recognize the accomplishments of two NASA missions: Mars 2020, which landed at Gale Crater on Feb. 18, 2021, and the Mars Reconnaissance Orbiter, which has been in orbit since 2006. The stamps feature images of the Perseverance rover and the dunes in Proctor crater, with the souvenir sheet dedicated to the history-making Ingenuity Mars Helicopter.

The remaining two stamps and souvenir sheet focus on China’s Tianwen 1 mission, which entered orbit on Feb. 10, 2021 and touched down three months later on May 14. Depicted are the Zhurong rover, its landing platform and the pre-selected area where both landed on the Martian surface.

Consistent with other UNPA releases, the Planet Mars commemoratives were issued in three denominations: Swiss francs for the UAE-themed stamps, U.S. dollars for the NASA releases and European Euros for the Chinese subjects.

The Planet Mars commemoratives were first released on April 24. They can be ordered from the UNPA website and purchased from the shops at UN Headquarters in New York, Geneva and Vienna where the stamps can be used for sending mail. Collectible envelopes postmarked for the first day of issue (also known as “first day covers”) are also on sale.

UNPA stamp subjects reflect the work of the world organization and serve as a reminder of the UN’s commitment to its goals. Previous UNPA space exploration issues include a 2018 set commemorating the 50th anniversary of the first UN conference on the exploration and peaceful uses of outer space; a 2013 pair of nebula-theme stamps for World Space Week; a 2011 release for the 50th anniversary of human spaceflight; and a 2007 collection of eight stamps marking 50 years since the start of the Space Age.

“As humankind races toward Mars, it is important that countries work together to promote international cooperation and peaceful use and exploration of space, and in the utilization of space science and technology for sustainable economic and social development. Since 1958, the United Nations Office for Outer Space Affairs (UNOOSA) works to promote these objectives,” UNPA officials stated.