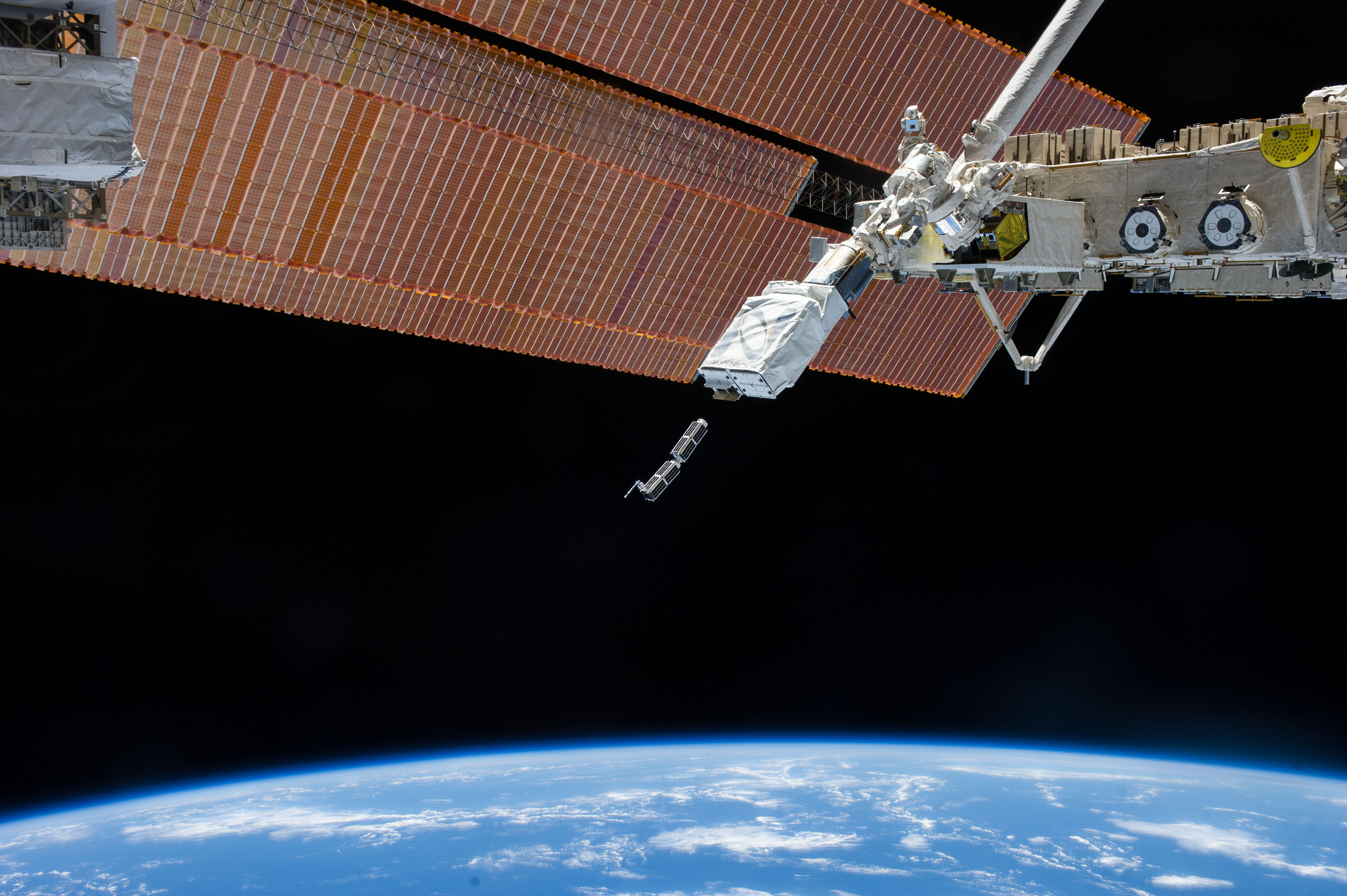 Private companies have launched dozens of imaging satellites — like the two small boxes in the middle of the photo — into orbit in recent years.  (Image credit: NASA/Steve Jurvetson, CC BY-NC)

Satellites owned by private companies have played an unexpectedly important role in the war in Ukraine. For example, in early August 2022, images from the private satellite company Planet Labs showed that (opens in new tab) a recent attack on a Russian military base in Crimea caused more damage than Russia had suggested in public reports. Ukrainian President Volodymyr Zelenskyy highlighted the losses (opens in new tab) as evidence of Ukraine’s progress in the war.

My research focuses on international cooperation in satellite Earth observations (opens in new tab), including the role of the private sector. While experts have long known that satellite imagery is useful during a conflict, the war in Ukraine has shown that commercial satellite data can make a decisive difference — informing both military planning as well as the public view of a war. Based on the strategic value commercial satellite imagery has held during this war, I believe it is likely that more nations will be investing in private satellite companies.

Remote-sensing satellites circle the Earth collecting imagery, radio signals and many other types of data. The technology was originally developed by governments for military reconnaissance, weather forecasting and environmental monitoring. But over the past two decades, commercial activity in this area has grown rapidly — particularly in the U.S. The number of commercial Earth observation satellites has increased from 11 in 2006 to more than 500 in 2022 (opens in new tab), about 350 of which belong to U.S. companies.

The earliest commercial satellite remote-sensing companies worked closely with the military from the beginning, but many of the newer entrants were not developed with national security applications in mind. Planet Labs, the U.S.-based company that has played a big role in the Ukrainian conflict, describes its customers (opens in new tab) as those in “agriculture, government, and commercial mapping,” and it hopes to expand to “insurance, commodities, and finance.” Spire, another U.S. company, was originally focused on monitoring weather and tracking commercial maritime activity (opens in new tab). However, when the U.S. government set up pilot programs (opens in new tab) in 2016 to evaluate the value of data from these companies, many of the companies welcomed this new source of revenue.

The U.S. government has its own highly capable network of spy satellites, so partnerships with private companies may come as a surprise, but there are clear reasons the U.S. government benefits from these arrangements.

First is the simple fact that purchasing commercial data allows the government to see more locations on the Earth more frequently. In some cases, data is now available quickly enough to enable real-time decision-making (opens in new tab) on the battlefield.

The second reason has to do with data sharing practices. Sharing data from spy satellites requires officials to go through a complex declassification process. It also risks revealing information about classified satellite capabilities. Neither of these is a concern with data from private companies. This aspect makes it easier for the military to share satellite information (opens in new tab) within the U.S. government as well as with U.S. allies. This advantage has proved to be a key factor (opens in new tab) for the war in Ukraine.

This photo was taken by a Planet Labs satellite on Aug. 10, 2022, and shows damage to planes from a Ukrainian attack that took place only one day before, on Aug. 9, 2022. (Image credit: Imagery courtesy of Planet Labs PBC)Use of satellite data in Ukraine

Commercial satellite imagery has proved to be critical to this war in two ways. First, it’s a media tool that allows the public to watch as the war progresses in incredible detail, and second, it’s a source of important information that helps the Ukrainian military plan day-to-day operations.

In early March 2022, Ukraine’s Vice Prime Minister, Mykhailo Fedorov, asked eight commercial satellite companies for access to their data. In his request, he said that this could be the first major war in which commercial satellite imagery played a significant role (opens in new tab). Some companies obliged, and within the first two weeks of the conflict the Ukrainian government received data covering (opens in new tab) more than 15 million square miles (40 million square km) of the war zone.

A recent example of the value of these images comes again from Planet Labs. Over the past few weeks, the company has been releasing images showing the conflict drawing dangerously near the Zaporizhzhia nuclear power plant (opens in new tab). In recent days, U.N. officials have said the situation poses a “very real risk of a nuclear disaster (opens in new tab)” and pushed for U.N. experts to be allowed to visit the site.

Before the war, Ukrainian officials thought money was better spent on “down-to-earth” security needs, rather than expensive satellites. But now these officials view satellite imagery as critical (opens in new tab) — both to battlefield awareness and for documenting atrocities allegedly carried out by Russian troops.

I believe the fact that the U.S. commercial sector had such a significant effect on military operations and public opinion will lead to increased government investment in the private satellite sector globally. Leaders in Ukraine intend to invest in domestic satellite imaging capabilities (opens in new tab), and the U.S. has expanded its commercial purchases (opens in new tab). This expansion may raise new challenges if abundant satellite imagery is available to actors on both sides of a conflict in the future.

The war in Ukraine may well prove to be a key turning point for both global transparency in conflict and the commercial Earth-observing sector as a whole.