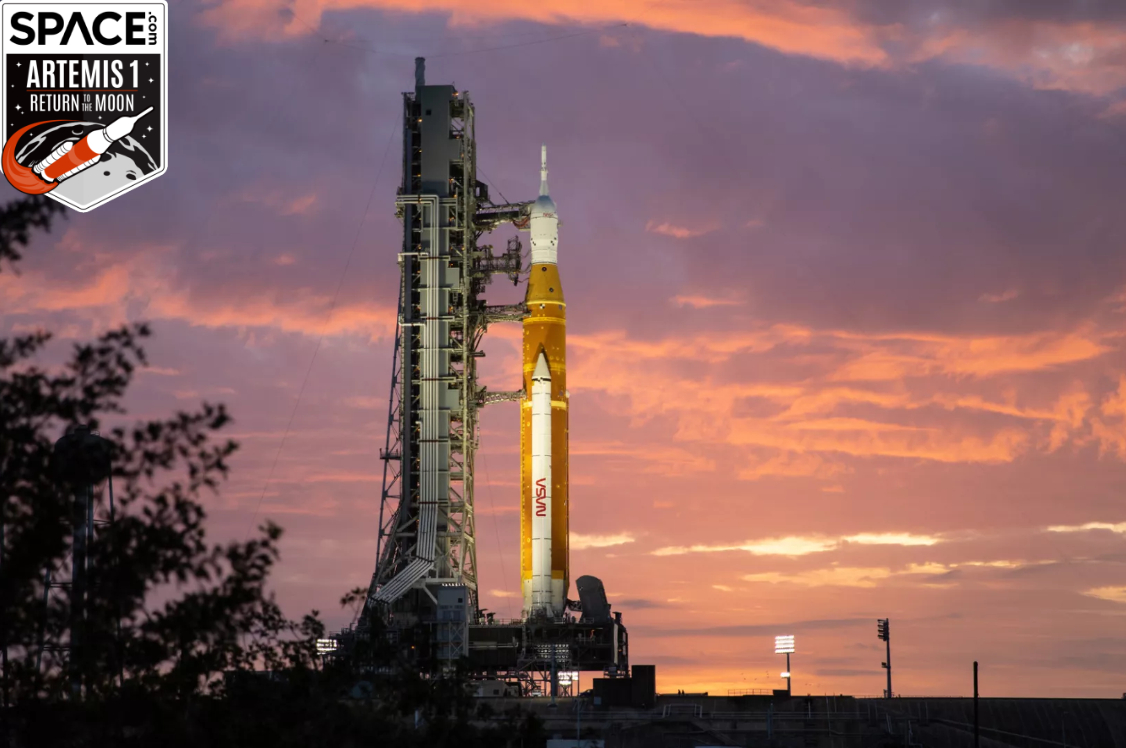 Update: This page was updated on Aug. 31 with NASA’s new Artemis 1 launch schedule.

NASA’s huge Artemis 1 rocket is counting down to a second launch attempt to return the moon and when it does, you can watch the historic mission live online for free.

NASA will host a series of webcasts leading up to the uncrewed Artemis 1 launch, which will mark the first test flight of the Space Launch System megarocket with its Orion spacecraft.. The launch day webcast will include special guests like actors Chris Evans, Jack Black and Keke Palmer. You can already see live views of the Artemis 1 moon rocket atop its pad in the online live feed.

The last time a rocket this powerful thundered off a KSC pad was back in 1973 when a Saturn V moon rocket carried Skylab into orbit, marking the end of the Apollo era, so this month’s event should be quite a show.

According to NASA (opens in new tab), the space agency will deliver comprehensive coverage of prelaunch, launch, and postlaunch activities for Artemis I when it comes time to light the candle. This momentous uncrewed dress rehearsal around the moon will clear the trail for a crewed moon-bound flight test with 2024’s Artemis 2, and an actual lunar landing by 2025 as part of Artemis 3.

Those lucky enough to be joining the Artemis 1 spectacle in Florida will be treated to the shock and awe of 8.8 million pounds of thrust fighting gravity and propelling the sleek SLS rocket and Orion space capsule into the heavens. For the rest of us, NASA just released its schedule for the free livestream broadcast to watch the mission  from the safety and comfort of our own homes.

Sure, it might not provide the same epic experience that the Earth-shuddering blastoff will offer, but it’s the next best thing and you don’t have to worry about the heat, parking hassles, or huge crowds.

The stages of the Artemis 1 mission to the moon. (Image credit: NASA)

On launch day, a live broadcast of the festivities includes celebrity appearances by Jack Black, Chris Evans, and Keke Palmer, as well as a patriotic performance of “The Star-Spangled Banner” courtesy of Josh Groban and Herbie Hancock. Then we’ll hear “America the Beautiful” played by The Philadelphia Orchestra and cellist Yo-Yo Ma, conducted by Yannick Nézet-Séguin.

Here’s a rundown of the upcoming launch activities leading up to liftoff.

On Thursday, Sept. 1, NASA will hold a press conference at 6 p.m. EDT (2200 GMT) to once again discuss the launch readiness of the Artemis 1 mission.

The press conference will follow a day-long mission management team meeting in which NASA officials decide if the Artemis 1 Space Launch System and its Orion spacecraft are ready for a 2nd launch attempt.

Speaking in this prelaunch briefing will be:

On Friday, Sept. 2, at 9 a.m. EDT (1300 GMT), NASA will hold one final press conference on the status of Artemis 1 going into its second launch attempt.

During the briefing, NASA will discuss any new issues that have cropped up as Artemis prepares to launch, as well as any weather concerns.

Speaking in the briefing are:

The clock will begin ticking down toward launch at the end of the 2.5-hour hold.

Saturday, Sept.3, is the second launch attempt for NASA’s Artemis 1 moon mission and it’s going to be a LONG day.

NASA’s webcast activities begin at 5:45 a.m. EDT (0945 GMT), with a live webcast on the fueling  operations, which NASA calls tanking, of the Space Launch System. The core stage of the SLS rocket can hold about 730,000 gallons of super-cold liquid oxygen and liquid hydrogen, so loading that propellant will take up to 3 or 4 hours.

There is a critical moment to watch for in the fueling: the early chill down of the four main engines on the SLS rocket. One of those engines, Engine No. 3, did not reach anywhere near its target temperature during the first launch attempt, prompting the scrub.

“Launch coverage will continue through translunar injection and spacecraft separation, setting Orion on its path to the moon,” NASA wrote in a description.

The webcast will run through launch and the first 15 minutes of the mission after liftoff. Following the launch, you can get Spanish-language updates on Artemis 1 through the NASA en español social media channels.

This is the moment of truth for NASA’s Artemis 1 mission: the first launch window for the Space Launch System rocket.

NASA actually has a two-hour window in which to try to launch the SLS booster, so liftoff could occur anytime between 2:17 p.m. EDT and 4:17 p.m. EDT (1817-2217 GMT), weather and technical systems permitting.

After launch, NASA will hold a post-launch press conference scheduled for no earlier than 1 hour after the launch broadcast ends. NASA will hold 6 p.m. EDT (2200 GMT) start time for this briefing, but that could change as the day progresses.

Below are the NASA officials scheduled to speak in the briefing.

If all goes well with the launch, NASA will host a webcast to highlight the first trajectory maneuver to send the Artemis 1 Orion beyond Earth orbit and off to the moon.

The time of this coverage may change depending on the launch time of the Artemis 1 mission.

The last major Artemis 1 launch day event is when the Orion spacecraft is expected to beam its first views of the Earth from space.

Like the outbound trajectory maneuver, the timing of this broadcast is subject to change depending on the exact launch time and the health of the Orion spacecraft.

For a complete rundown of all the talks and activities surrounding Artemis 1’s thrilling flight, check out NASA’s detailed coverage schedule.

Whether staking out a sweet in-person spot to watch Artemis 1 or taking it all in via NASA’s livestream options, it’s destined to be the pyrotechnics show of the summer!

One week from launch, on Monday, Aug. 22, NASA Artemis 1 mission managers will meet in a day-long Flight Readiness Review to decide of the Artemis 1 SLS rocket is ready for launch.

At 7 p.m. EDT (2300 GMT), NASA will hold a press conference to report on the results of that meeting and if the Artemis 1 moon rocket is still on track for its Aug. 29 liftoff.

Here’s who will appear in that briefing.

On Friday, Aug. 26, NASA will hold a press conference at 10 a.m. EDT (1400 GMT) to highlight the role of commercial space industry on the Artemis 1 mission.

The Artemis 1 launch countdown will begin at 10:23 a.m. EDT (1423 GMT) on Saturday, Aug. 27. Flight controllers will be called to their stations on this day and begin the two-day countdown to the final launch target.

On Saturday, Aug. 27, NASA will hold a two briefings to discuss the Artemis 1 mission. The first will be at 11 a.m. EDT (1500 GMT), when mission managers will meet to review the launch plan for Artemis 1 as well as its mission goals.

The briefing will include an overview of the mission, a look at the weather forecast and NASA’s backup plans in case an Aug. 29 launch date is delayed. Backup days for the mission are currently targeted for Sept. 2 and Sept. 5.

After the prelaunch briefing, NASA will hold a press conference on Saturday, Aug. 27 at 2:30 p.m. EDT (1830 GMT), led by NASA Administrator Bill Nelson to discuss the agency’s plans to explore the moon, Mars and beyond..

NASA has billed the talk as a “briefing on the agency’s Moon to Mars exploration plans” and it will feature presentations by Nelson and representatives from across the agency’s exploration, space technology and spaceflight branches to outline plans to reach Mars from the moon under the Artemis program.

Monday, Aug. 29, was the first launch attempt for NASA’s Artemis 1 moon mission and it’s going to be a LONG day.

NASA’s webcast activities began at 12 a.m. EDT (0400 GMT), with a live webcast on the fueling  operations, which NASA calls tanking, of the Space Launch System. The core stage of the SLS rocket can hold about 730,000 gallons of super-cold liquid oxygen and liquid hydrogen, so loading that propellant will take up to four hours.

NASA ultimately could not chill down one of the SLS rocket’s main engines to its target temperature, delaying launch.

After launch, NASA held a post-launch press conference scheduled for no earlier than 1 hour after the launch broadcast ends. NASA held it a 1 p.m. EDT (1700 GMT) start time for this briefing, but that could change as the day progresses.

Below are the NASA officials scheduled to speak in the briefing.

NASA will hold a post-scrub press briefing (opens in new tab) on Tuesday (Aug. 30) at 6:00 p.m. ET (2200 GMT). The teleconference will discuss the next steps for the flight test of the agency’s Space Launch System mega moon rocket and uncrewed Orion spacecraft following the scrubbed launch attempt on Monday (Aug. 29).

Friday, Sept. 3 is the next window for launch attempt for NASA’s Artemis 1 moon mission. The agency has not yet stated whether an attempt will be made in this window after encountering an issue with one of the rocket’s four RS-25 engines on its core stage.