What is a bear trap in trading and how to avoid it? 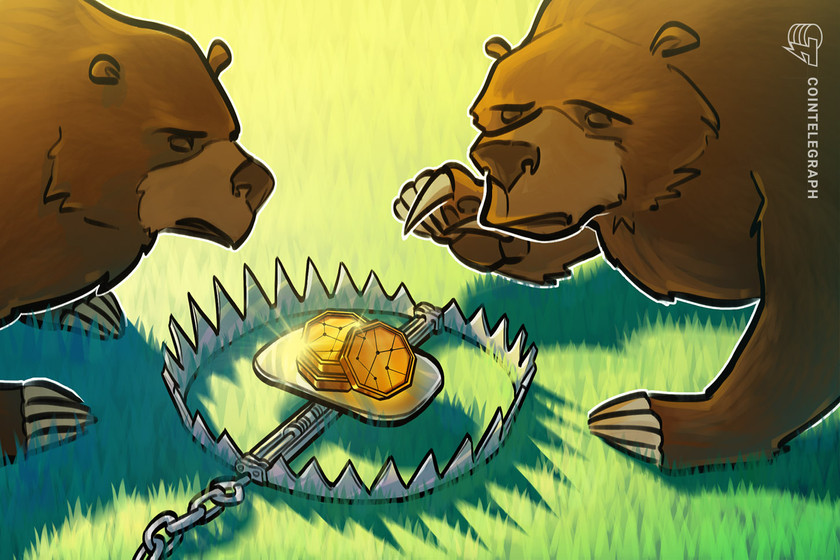 Intended to convince market participants of a price correction, bear traps are orchestrated by entities with large holdings to make quick profits.

How to identify and avoid a bear trap?

As a difficult proposition for novice traders, a bear trap can be recognized by using charting tools available on most trading platforms and demands caution to be exercised.

In most cases, identifying a bear trap requires the use of trading indicators and technical analysis tools such as RSI, Fibonacci levels, and volume indicators, and they are likely to confirm whether the trend reversal after a period of consistent upward price movement is genuine or merely meant to invite shorts.

Any downtrend must be driven by high trading volumes to rule out the chances of a bear trap being set up. Generally speaking, a combination of factors, including the retracement of price just below a key support level, failure to close below critical Fibonacci levels and low volumes, are signs of a bear trap being formed.

For crypto investors with a low-risk appetite, it is best to avoid trading during abrupt and unsubstantiated price reversals unless price and volume action confirms a trend reversal below an important support level.

It makes sense to retain cryptocurrency holdings during such times and avoid selling unless prices have breached the initial purchase price or stop-loss level. It is beneficial to understand how cryptocurrencies and the entire crypto market react to news, sentiments or even crowd psychology.

Practicing this can be much more difficult than it seems, especially when one factors in the high volatility associated with most cryptocurrencies in trade today.

On the other hand, if you do want to profit from the momentum reversal, it is better to get into a put option rather than short-selling or becoming a long seller in the underlying cryptocurrency. This is because short-selling or selling a call can expose the trader to unlimited risk if the cryptocurrency resumes its upward trend, which isn’t the case if one opts for a put position.

In the latter strategy, losses are limited to the premium paid and have no bearing on any long crypto position being held from before. For long-term investors looking for profit without high risks, it is better to stay away from trading during a bear trap altogether.

Is a bear trap bullish or bearish?

By comprising both a downward and an upward move, a bear trap can be traded by bearish and bullish traders using markedly different strategies and potential outcomes.

In the strictest sense, a bear trap unsettles traders and market participants, as it involves the underlying asset undergoing a change in momentum that is opposite to the primary bullish trend before swiftly reversing again to resume its upward journey.

If the asset’s price then goes on to move beyond the recent resistance level, it can be a positive sign and may be interpreted as a buying signal by a bullish trader. Alternatively, those with a bullish stance may employ a strategy involving simultaneously selling calls and puts of key price levels to yield profit in a wide price range.

For a bearish trader, the first trend reversal can be interpreted as a sign to sell, requiring sound risk-reward analysis and extreme caution to be displayed to avoid losing capital. The entry point for taking a short position needs to be perfectly timed and this makes trading a bear trap very difficult for a bearish trader.

Any error made in recognizing the resumption of the underlying bullish trend can be disastrous for bearish positions, especially if they are short-sold or leveraged.

Short-selling a cryptocurrency or creating short positions through other market instruments is a precursor to forming a bear trap.

Like with other asset classes like well-traded equities, popular cryptocurrencies like Bitcoin (BTC) can be shorted using different mechanisms like short-selling tokens, margin trading or trading in futures and options of the base cryptocurrency. These avenues are often used by mature traders and institutional investors to hedge their positions in the secondary market and can protect their investments in case the market or trend reverses.

As such, short-selling a cryptocurrency or shorting it by any of the available means is a common practice but takes place in volumes that are a fraction of the primary token trading volume. However, when done on an inordinately large scale, shorting a cryptocurrency like BTC can create immense downward pressure on its prices due to a collective rise in the fear quotient.

Technical indicators such as the relative strength index (RSI) can allude to a cryptocurrency entering bear territory, which can then trigger a broader sell-off that is driven by less-informed retail investors wanting to take risk off the table. If this sentiment sustains and prices fall below the key support levels, it can draw even more bearish investors to go short to serve as a lucrative opportunity for large trading entities to cause a bear trap by covering their original short positions.

Thus, a bear trap is preceded by short-selling a cryptocurrency by a bunch of investors who have large token holdings and ends when they either close their derivative positions, buy back their short-sold crypto positions, or a combination of both.

While anyone can initiate a short position or short-sell a cryptocurrency, colluding with other participants to manipulate an asset’s price is deemed illegal in markets like the United States and can invite the wrath of various central authorities.

How does a bear trap work in crypto markets?

Similar in mechanism as seen with other asset classes, a bear trap in crypto markets lures both bearish and bullish bets, often with disproportionate risks involved.

Used to describe both the mechanism and the short-lived price reversal falsely indicating the onset of a downtrend, a bear trap in crypto markets is a form of market manipulation that is brought about by concerted efforts of a group of traders who hold huge quantities of the underlying cryptocurrency.

By coordinating among each other, the collective selling of a particular token causes its price to fall and influences other retail participants to believe that the uptrend is over. Many investors may sell their holdings as a consequence and this results in the price falling even further for a few hours or days at an end.

Usually, on breaking below the previously held lows, these influential trader groups will then proceed to buy back the sold quantities at depressed prices, and this triggers a sharp upward move that entraps bearish bets en masse.

In a bid to limit their losses, traders with short positions would then scurry to buy the cryptocurrency and the resultant buying momentum only serves to take the price even higher. Thus, by selling at a higher price and buying back all sold positions at a lower price level, the trader group or bear trap setters intend to profit from the difference without affecting the quantity of cryptocurrency held by them in the long run.

What is a bear trap?

A prelude to a short-squeeze, a bear trap is a form of coordinated but controlled selling to create a temporary dip in an asset’s prices.

More often than not, novice traders get caught out by price volatility when trading in markets that deal with asset classes such as equities, commodities, bonds or even cryptocurrencies.

Although it is recommended to stay invested for the long term to ride out such bouts of volatility, price reversals can perplex even the most experienced traders. This makes it important to identify signs of a false reversal, a momentary directional change in the price direction, before resuming the underlying trend to avoid falling prey to them.

Increased volatility can even lure short-term traders into making multiple trades in an attempt to time the markets, resulting in deep losses for most and impacting their confidence or conviction in the underlying asset.

In a market that is trending upwards, a sudden downward move in terms of prices can induce increased volatility and may force market participants to either liquidate long-term holdings or go short on the underlying asset in the hope of earning a quick buck. This reversal, if caused by a group of investors selling in bulk, can be temporary and lasts for only as much time as is required for them to repurchase their holdings at a lower price.

Called a bear trap, this form of market manipulation deceives bearish participants into believing that the price reversal indicates the start of a downtrend and is often followed by a sharp resumption of the previous uptrend.

Shorting, the practice of selling an asset to repurchase it later at a lower price is extremely speculative in nature during such periods of volatility and leads bearish traders to assume extreme amounts of risk. Since a bear trap is often sudden and short-lived, long-term investors, too, could buckle under the temporary selling pressure and forfeit some or all of their profits.