WoW: Wrath Of The Lich King Classic Is Going To Be Even More Old-School Than You Remember

Blizzard is bringing back World of Warcraft’s wildly popular Wrath of the Lich King expansion, but when it arrives, it may be even more old-school than some players remember.

Wrath of the Lich King was a revolutionary expansion in many ways. It was during the expansion that Blizzard’s MMORPG peaked in terms of subscription numbers, and the expansion introduced the game’s first new class in the Death Knight, added achievements, and featured a fan-favorite villain that served as the perfect base to build an entire expansion around. While many players, and Blizzard itself, maybe didn’t realize it at the time, Wrath of the Lich King also started to lay the foundation for what would become the modern-day version of the game, with the addition of convenience features like automated dungeon matchmaking and markers on the map telling players exactly where to go to complete their quests.

Those two features specifically won’t be present in Wrath of the Lich King Classic. That was a conscious decision on Blizzard’s part in order to preserve what Blizzard describes as Classic’s “core values.” While many players consider the game’s 2010 Cataclysm expansion as the major turning point in the history of the game, when many of the game’s classes and systems were updated to be more similar to how they are now, those seeds were actually planted with the final Wrath of the Lich King patch. Wrath of the Lich King Classic will still operate on the expansion’s last patch, only minus the features that, in the WoW Classic team’s mind, started to erode the social-focused experience of the MMORPG.

“We don’t make these kind of changes lightly,” Wrath of the Lich King Classic principal system designer Kris Zierhut said in a recent group interview that GameSpot participated in. “They come from really core values as to what Classic is about. We think Classic is about being social, making friends, meeting new people. In order to make that happen, you have to run into those people on multiple occasions, you have to have a chance to play with them, and then play with them a second time and say ‘Oh yeah, I remember that guy, he was cool last time, maybe I should add him to my friend’s list. Maybe I should put him on my list of people I try to make dungeon groups with,’ after you’ve had a successful dungeon run. We want to emphasize social and we also want to emphasize the world and immersion in the world.”

The changes coming in Wrath of the Lich King Classic are a good indication of how much Blizzard’s mindset has changed since it first released WoW Classic in 2019. Back then, Blizzard sought to recreate “vanilla” WoW as it was back in 2006 as closely as possible, with as few changes as possible. But over time, specifically towards the end of WoW Classic’s content release cycle and as part of Blizzard’s re-release of the game’s first expansion, The Burning Crusade, that philosophy began to change. 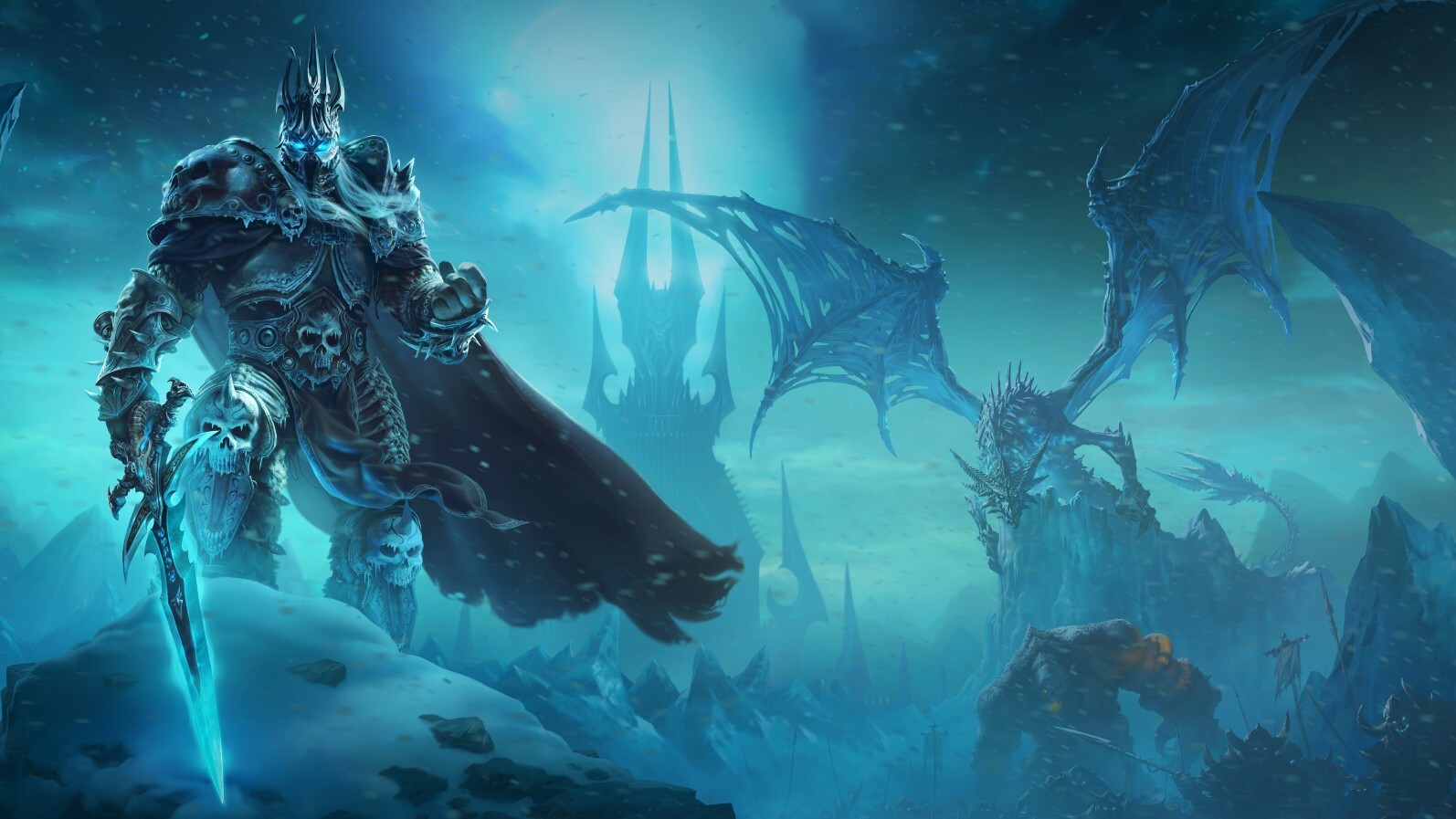 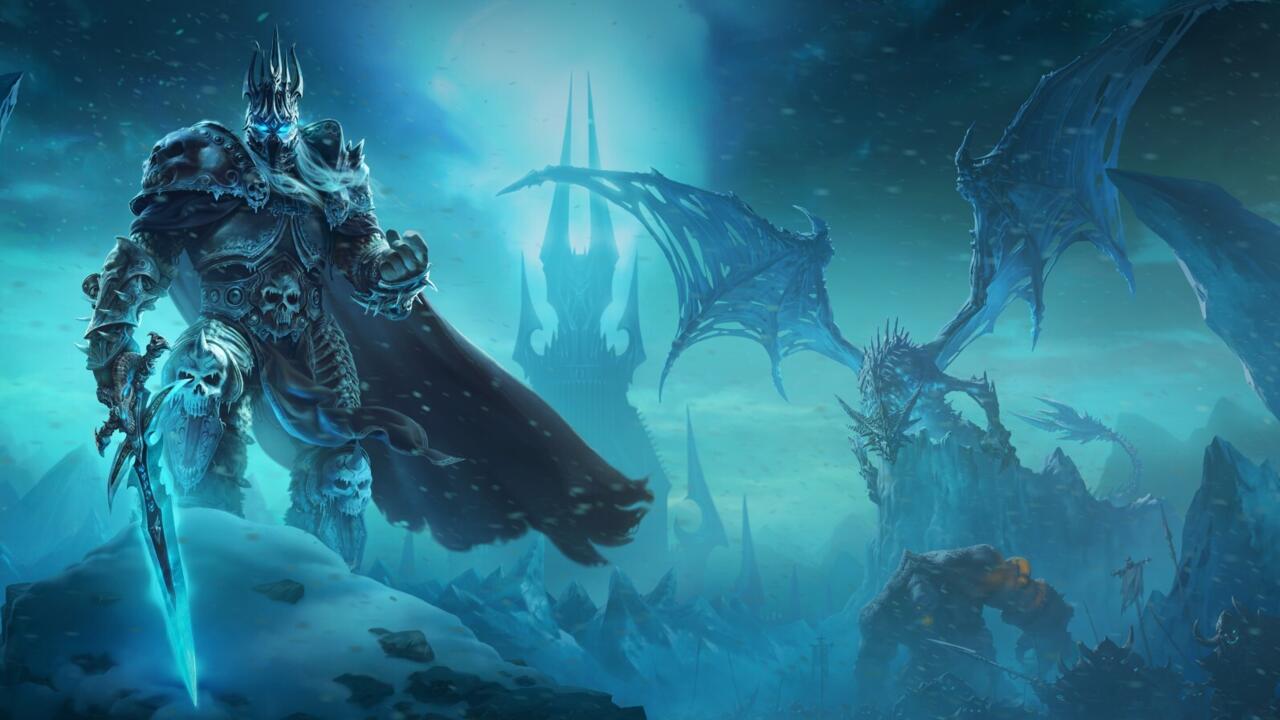 The WoW Classic team started to look at and implement player feedback, including quality-of-life updates that improved the WoW Classic player experience while still staying true to the old-school nature of the original game and its first expansion. Some of those changes included updating the rate at which the game’s servers detected inputs to account for modern internet speeds. Other changes included the ability for same-faction PvP battlegrounds in Burning Crusade Classic, done in the name of reducing queue times and helping to solve a faction imbalance problem. Blizzard even introduced WoW Classic Season of Mastery, where players could create new characters and play through vanilla WoW all over again, albeit this time at an accelerated rate with more challenging raids, increased loot drop rates, and other major changes.

Wrath of the Lich King Classic, then, is an opportunity for Blizzard to take a second pass at the game’s most beloved expansion, this time keeping in mind the social systems that weren’t considered when the expansion originally released in 2008.

“We didn’t have people thinking about how social systems should work back when we originally did Wrath of the Lich King, so it’s a new lens to look at things,” Zierhut said. “What promotes social? What damages social? Paying close attention to that…We’re trying to think about as we design for Wrath of the Lich King [Classic] how we can promote social, how we can create those situations where people can find similarity, engage in acts of reciprocity, the things that lead them to friendship, and avoid damaging social proximity. That’s the thing we weren’t careful about when we worked on Wrath of the Lich King the first time.”

Other changes that will be implemented come from Blizzard having watched Wrath of the Lich King play out once already, with Zierhut using the game’s Death Knights as an example. Originally, players who wanted to play a Death Knight had to play catch-up in the days following the expansion’s release, as the class started at level 55. Meanwhile, everyone else who didn’t make a Death Knight was already level 70 and on the boat to Northrend to experience the new content. Blizzard will be avoiding that scenario this time around, with Death Knights coming as part of the expansion’s pre-patch. While Blizzard wouldn’t promise an exact length of time for the patch, the plan is for it to last somewhere between two to six weeks.

The Wintergrasp PvP battleground introduced as part of Wrath of the Lich King was another opportunity for Blizzard to make a positive quality-of-life change. In the original version of Wrath of the Lich King, players were so desperate to win Wintergrasp and score the loot found within the Vault of Archavon raid (which could only be accessed by the faction that controlled Wintergrasp) that they were transferring servers and changing factions to ensure they could win as much as possible. Blizzard will be looking at ways to make Wintergrasp less important by potentially offering different ways to earn the loot traditionally associated with the activity. Dual specialization, a feature introduced in Wrath of the Lich King that allowed players to swap between two different builds (for a price) will also be returning, though how it is implemented may change compared to its original version. The in-game barber shop will be updated to use in-game gold, and will allow players to change their gender alongside other features, which wasn’t an option in the original version. 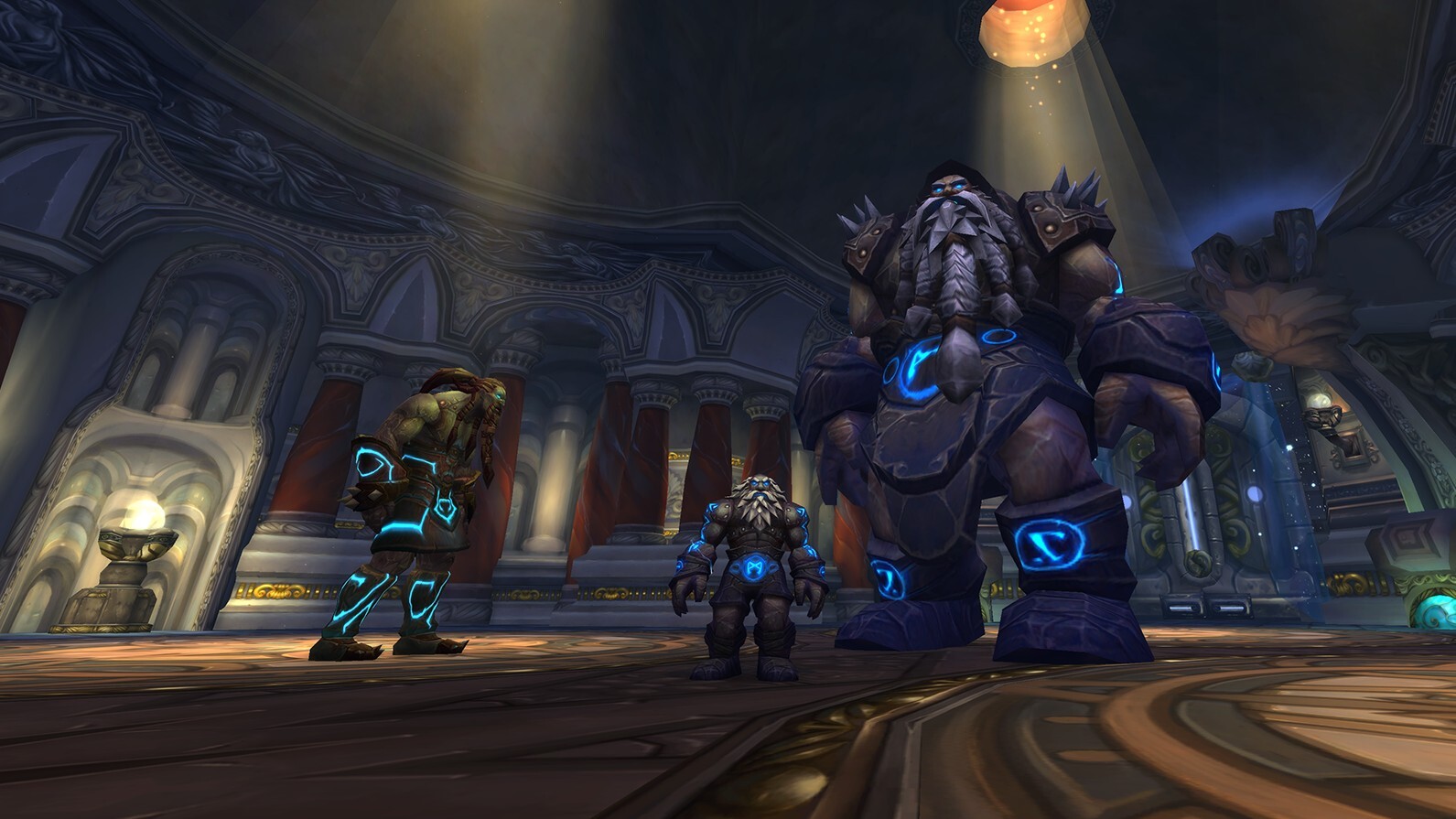 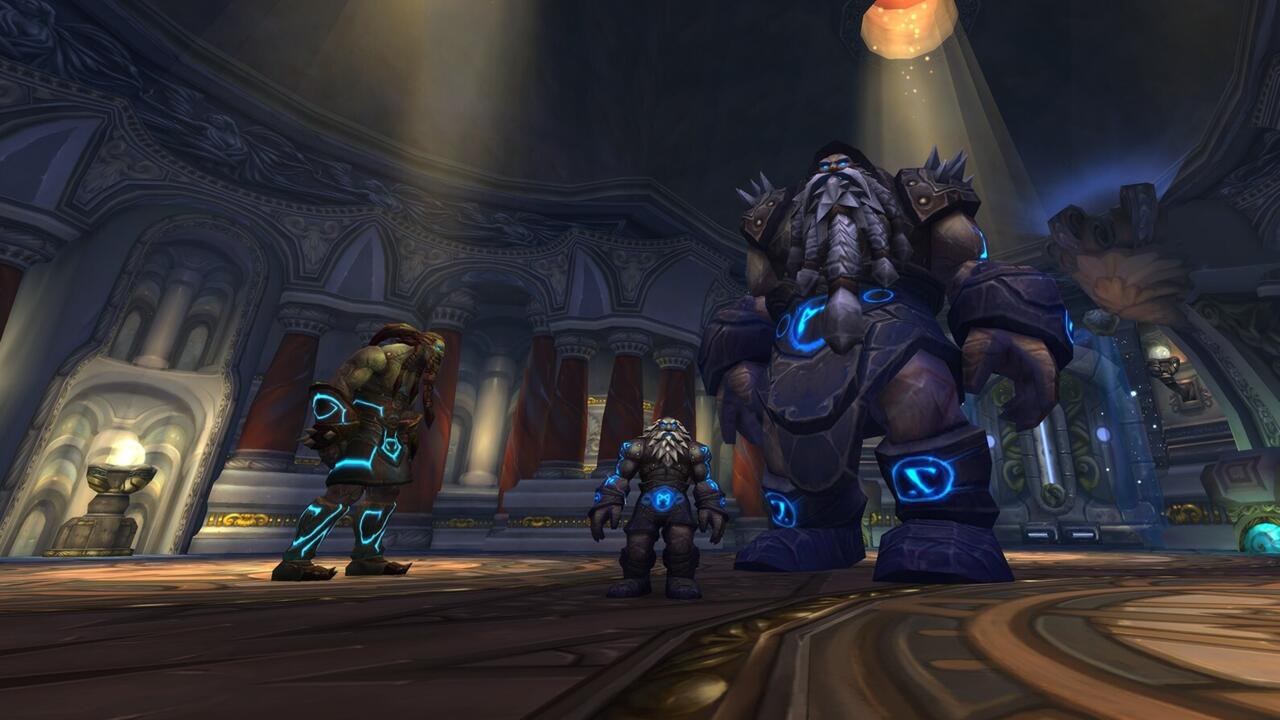 Changes to various spell names, quests, achievements, and other content have come in recent months to both WoW Classic and the modern version of the game in the name of inclusivity. Those changes will be present in Wrath of the Lich King Classic too, as Blizzard looks at ways to make WoW more welcoming and inclusive following recent sexual harassment and discrimination lawsuits and investigations accusing the company of having fostered a frat boy culture.

Like Burning Crusade Classic, Blizzard will offer a single paid character boost per account come Wrath of the Lich King Classic’s release, so that players who didn’t play WoW Classic or Burning Crusade Classic can get up to speed and jump into the newly released content. When asked if Wrath of the Lich King Classic would offer a paid deluxe edition similar to the one offered for Burning Crusade Classic–a bundle that upset a portion of the Classic community due to it introducing microtransactions to the previously microtransaction-free old-school MMO–Blizzard said it had nothing to announce at this time. Blizzard did note, however, that content similar to the in-game items found in Burning Crusade Classic’s deluxe edition have been available in WoW from the very beginning, dating all the way back to the collector’s edition for the original game back in 2004. For those lucky enough to have snagged one of the original WoW collector’s editions, those exclusive pets are usable in WoW Classic.

Blizzard made clear that many of the changes for Wrath of the Lich King Classic come straight from the game’s community, which Blizzard stressed is the key driving force behind nearly every decision the team makes, including what future expansions may get the “Classic” treatment next.

Wrath of the Lich King Classic is slated to arrive sometime in 2022. Blizzard recently announced the new expansion for the modern version of the game, Dragonflight. The game’s ninth expansion, it will add the new ranged Evoker class (which is also a new dragon race), the new Dragon Isles continent, and revamp a number of “evergreen” systems like professions and talents. Dragonflight will be released “when it’s ready.”