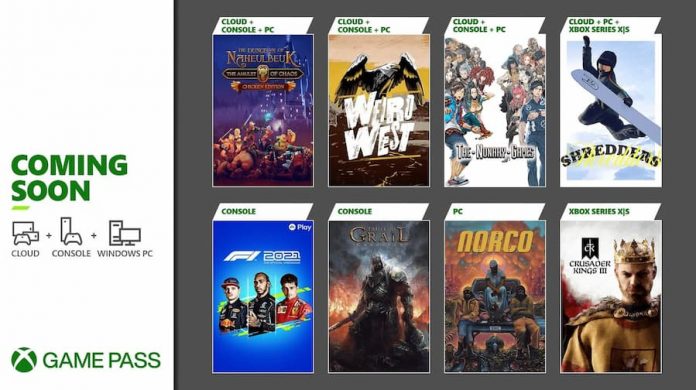 Eight new games are making their way to Xbox Game Pass before the end of March.

There’s a little something for everyone in March’s second Xbox Game Pass drop, with dungeon crawling, racing, strategy and snowboarding all taking their places amongst the line-up.

Better yet, four of the eight games are day one launches, meaning they’re brand new games coming to Xbox Game Pass fresh out of the oven.

Here’s what Xbox Game Pass subscribers have to look forward to before the end of March:

Of those games, Shredders, Norco, Crusader Kings III and Weird West are all day one launches. Crusader Kings III is already available on PC, but it’s yet to launch on console. When it does, on 29th March, Xbox Game Pass subscribers can be amongst the first to play.

We previewed Weird West last year, calling it “an action RPG with a touch of crazy”. We can also heartily recommend The Dungeon of Naheulbeuk, a fun take on a dungeon-crawling RPG that packs in plenty of laughs along the way.

Of course, when new games enter Xbox Game Pass, it means some must leave. Four games are leaving on 31st March:

Related: The Best Games on Xbox Game Pass You Probably Haven’t Heard Of