You can see the moon eclipse Uranus tonight (Sept. 14) in a rare occultation 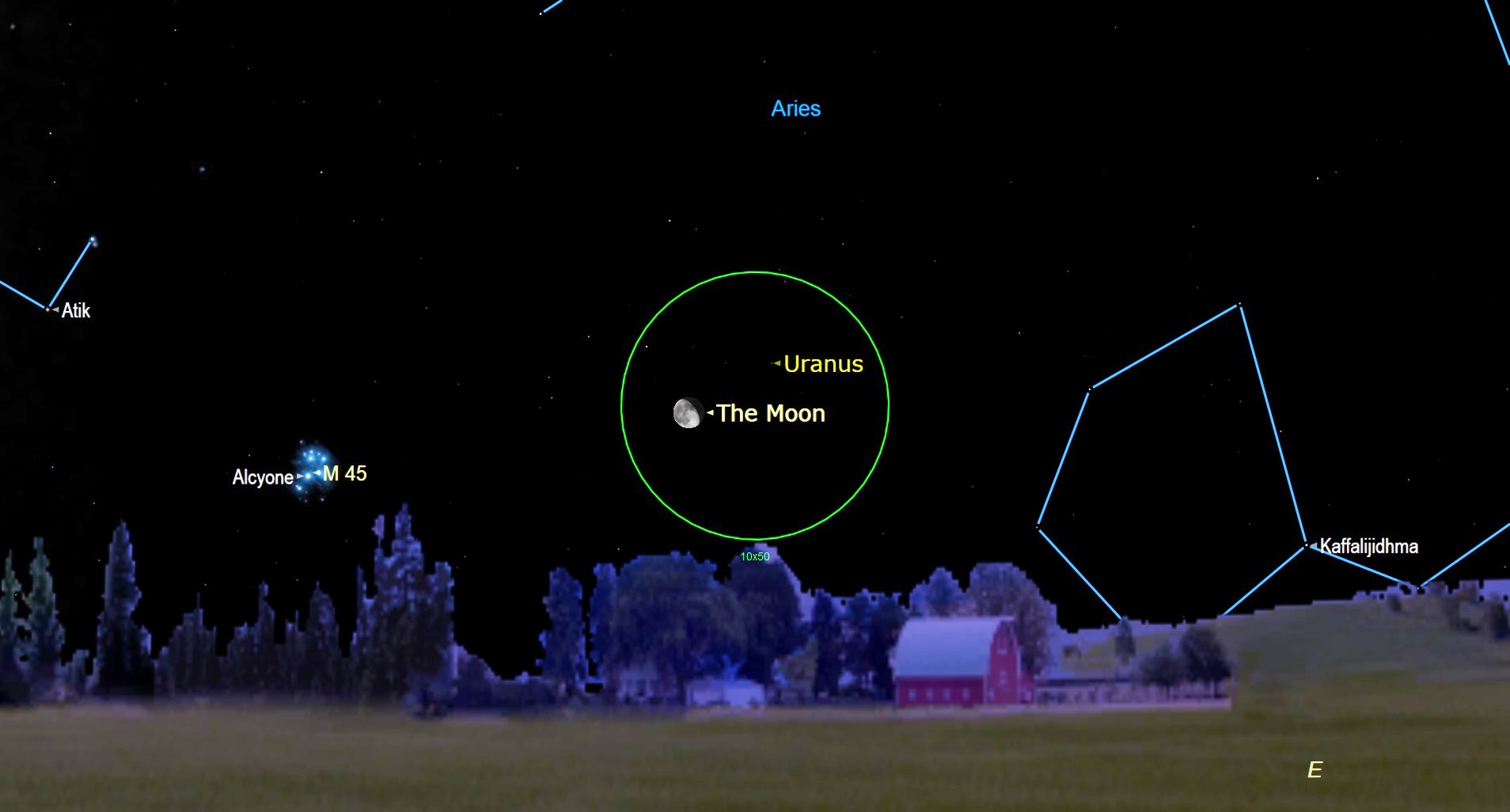 On Wednesday (Sept. 14), the moon will pass in front of Uranus in an event called a lunar occultation that will be visible from parts of Africa, Asia, and Europe.

The occultation will begin at 6:26 p.m. ET (2226 GMT) when Uranus  —  an ice giant planet located towards the outer edge of the solar system  —  begins to disappear behind the moon for about an hour. After this, the planet will emerge from behind the moon.

The occultation will be visible at around 12 degrees to 13 degrees above the eastern horizon in the U.K. (A fist at arm’s length corresponds to roughly ten degrees in the sky.) Using a pair of binoculars or a small telescope, skywatchers will see Uranus gradually disappear behind the bright limb of the moon.

The moon is on quite the roll when it comes to occultations with Uranus. It has blocked the ice giant in the night sky at least once a month since February 2022, and will continue to do so until the year is out. As seen from at least somewhere on Earth.

Like all occultations  —  events in which the moon moves in front of stars, planets, or even asteroids obscuring them from view, the occultation of Uranus is only visible from certain parts of the planet.

This is because the moon is close to Earth and thus has a large parallax  —  the displacement of an object as seen from two different points that aren’t in a straight line with that object.

The position of the moon as seen from points on opposite sides of the Earth is shifted between two and four degrees. That means when observers on one side of the Earth see the moon occult an object, skywatchers on the other side will see it next to that object, separated by about two degrees.

Also, as a result of the moon’s proximity to Earth, it moves through the night sky rapidly. This means that occultations of planets usually last for only about an hour.

That’s not as quick as another type of lunar occultation, however.

Technically, because it is caused by the moon moving in front of the sun, solar eclipses are examples of lunar occultations. There are usually between two and five solar eclipses each year, but the moon covers other bright, vastly more distant  stars visible to the naked eye much more frequently.

Over the course of a year, the moon will move past all the constellations roughly once a month and will cover about 0.5% of the night sky. That means it covers approximately 850 stars usually visible to the naked eye with occultations occurring on a monthly basis.

Astronomers and sky watchers can predict which bright stars will be involved in lunar occultations by observing the path the moon traces through the sky.

Another occultation of the moon and Uranus will occur before 2022 is over for observers in Europe and Asia, with the two astronomical objects encountering each other again on Dec. 5.

Just like the occultation on Sept. 14, the moon will obscure the distant ice giant causing it to disappear from view. On Dec. 5 the occultation will last for 30 minutes beginning at 12:50 p.m. ET (16:50 GMT).

Skywatchers in the US and Europe will get to see Mars disappear behind the moon again on Dec. 8, 2022.

Editor’s Note: If you snap a photo of the moon and Uranus and would like to share it with Space.com’s readers, send your photo(s), comments, and your name and location to [email protected].